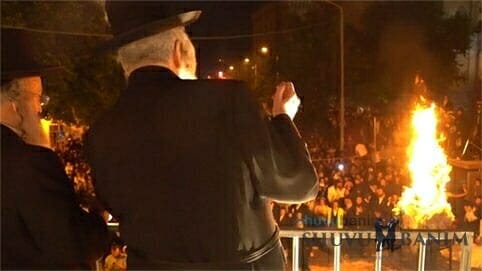 The video of the bonfire lighting of the holy Breslov community Shuvu Banim with our Rebbe Rav Eliezer Berland shlit”a.

In the video, it’s possible to see the thousands who came to the bonfire lighting for Lag B’Omer 5782 at the corner of Shivtey Yisrael and HaHoma HaShlishit streets.  In honor of the lighting, the streets were closed to traffic, and the streets subsequently filled up with people celebrating the hilulah of Rabbi Shimon bar Yochai.

The newly-enforced limitations on the Lag B’Omer celebration in Meron meant that outside of one bonfire lighting, the many traditional bonfires were outlawed in Meron this year.  Therefore, the holy Breslov community of Shuvu Banim, which every year hosts a giant bonfire lighting event in honor of Rabbi Shimon bar Yochai, had to move the event to Jerusalem.

The hilulah (yahrzeit celebration) began with the Ma’ariv prayer and the counting of the Omer in the prayer courtyard of Rav Berland shlit”a.  Immediately at the conclusion of the prayer, the masses of people made their way to the corner of Rh’ Shivtey Yisrael and HaHoma HaShlishit, where already the Shuvu Banim orchestra and choir were playing in front of the stage which was constructed in honor of the holy event.

After the location designated for the bonfire became filled up with cotton and olive oil which the community poured onto it in honor of Rabbi Shimon bar Yochai, Rav Berland shlit”a arrived.

With holy fervor, the Rav lit the bonfire.  Immediately with the lighting, masses of people joined in with dancing with the accompaniment of the orchestra.  The Rav shlit”a danced in a circle on the stage with his close family and the rabbis of Shuvu Banim shlit”a.

In the course of the dancing, the Rav shlit”a took part in the Chalaka (first haircut) celebration for three-years-olds.

The proud parents ascended the stage dressed in Shabbat clothes with their children where the Rav awaited them.