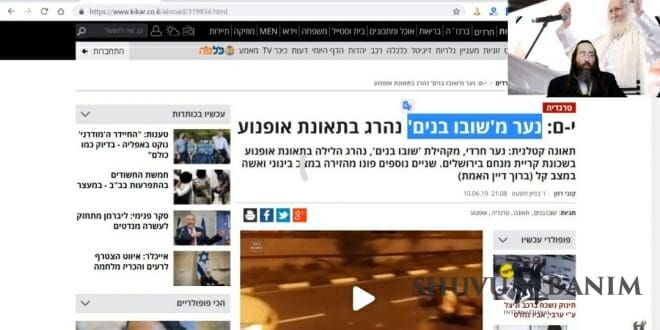 The last couple of days, we’ve unfortunately witnessed more of the media’s manipulation and deceit when it comes to Rabbi Eliezer Berland and the Shuvu Banim community – and sadly, nowhere more than in the so-called ‘haredi’ news outlets.

Rabbi Yaakov Selma put out a video (which you can see in the clip below) where he compared the media’s treatment of the miraculous recovery of Shuvu Banim avreich Gavriel Lavie, with the treatment that they gave to a story involving a fatal motorbike accident involving another young man from the community.

Given the concerted efforts that are continuing within certain parts of the haredi community to try and place Rabbi Berland in cherem on the basis of all the false allegations,  we have teamed up with Rabbi Selma to show what’s happening over on the other side of the distorted stories that are being put out by the so-called ‘orthodox’ press.

Yesterday, (June 13th, 2019), there was a massive press conference held in the Shaarei Tzedek hospital (as we covered HERE), where Shuvu Banim student Gavriel Lavie spoke about his miraculous recovery from an awful terrorist attack by the Damascus Gate, that left him with over 40 stab wounds.

Reb Lavie explained the scope of the miracles he’d experienced, how his life was mamash hanging in the balance, and how a pidyon nefesh that was done for him with Rabbi Eliezer Berland completely turned the whole picture around, and saw him walking out of hospital after just 10 days.

In his interview, Gavriel mentioned Rabbi Eliezer Berland on at least 7 different occasions.

He publically thanked him for his blessing, guidance and spiritual intervention. Most of the mainstream haredi news outlets in Israel covered the story, and even ran video clips of Gavriel giving over his own story – that were doctored to omit any mention of Rabbi Berland, or the Shuvu Banim yeshiva.

The articles they wrote to accompany these videos similarly failed to mention Rabbi Berland, and changed Gavriel’s words around to get past these puzzling omissions.

It’s a wonder of wonders!

Even the prestigious haredi site Kikar HaShabbat was at Gavriel’s press conference at the Shaarei Tzedek Hospital in Jerusalem, and they heard with their own ears how he was praising Rabbi Berland and talking about the Shuvu Banim yeshiva. Yet when they did their full write up on their story, they didn’t mention the Rav, or Shuvu Banim, even a single time.

We could be forgiven for thinking that maybe, there is just some sort of policy in place to avoid any hint of the controversy that surrounds the Rav. But if that’s true, it’s strange that on the same day, another story appeared on the site that was very happy to mention Shuvu Banim and Rabbi Berland – but only in a negative way.

The story involved an awful fatal motorcycle accident where one of the young men of the community was tragically killed by a 49 year old woman who accidentally ran into him with her car. He was not to blame for what occurred.

For that story, Kikar Shabbat made sure the words ‘Shuvu Banim’ were even emblazoned in their headline, and ensured that every reader should know that this fatal accident involved someone connected to Rabbi Berland and his community. Of course, the message was clear: Shuvu Banim people are out there causing fatal accidents all the time with their motorbikes, and reckless behavior!!

This is how Gavriel Lavie started his statement at the Shaarei Chesed press conference:

“Thank You to the Creator of the world, and to His faithful shaliach (messenger), Rabbi Eliezer Berland, the Tzaddik HaDor (the Tzaddik of the generation.)”

“I was hovering between life and death, and in the merit of the pidyon that my friends in the yeshiva gave [to Rav Berland] for me, everything turned around for the best. We go to our yeshiva go by way of the Damascus Gate, and we will continue to go via the Damascus Gate, and to not be scared, as per the instructions of the Tzaddik, Rabbi Eliezer Berland.”

Lavie mentioned Rabbi Berland and Shuvu Banim again and again in his statement to the press, vis:

“We will continue to go via the Damascus Gate, our yeshiva, Shuvu Banim, is there, the holy kehilla (community) of Shuvu Banim.”

In his video (in Hebrew) where Rabbi Selma demonstrated how so many of the haredi news sites distorted what was said, Rabbi Selma said the following:

“Kikar HaShabbat, listen to his words! He said: “Shvuu Banim”. So Kikar Shabbat, please return, you wayward children, and return in teshuva.[1]”

“At that moment [of the attack] I wasn’t scared. I felt that Hashem was with me, and that the Rav [Berland] was with me.”

But perhaps Kikar HaShabbat aren’t aware of this? Perhaps, that would explain why they eradicated every mention of Rabbi Berland and the Shuvu Banim yeshiva, in their coverage of Gavriel Lavie’s miraculous recovery? How else can we explain that they made sure the Rav wasn’t mentioned or referred to even once?

The same thing happened on nearly all the other ‘haredi’, ‘orthodox’ and ‘ultra-orthodox’ news sites. For example, on the popular Hidabroot website, readers were told that Lavie was learning in some nameless yeshiva in the Muslim Quarter of Jerusalem’s Old City. They never told their readers the name.

Let’s judge them favorably. Maybe, they didn’t hear what Lavie was actually saying? After all, he clearly said on tape that he was healed after his fellow yeshiva students at Shuvu Banim gave a pidyon to the Rav. Perhaps they weren’t aware that Rabbi Berland is the Rabbi of Shuvu Banim?

Even the secular media had less biased coverage

The strange thing is, that many of the secular news sites who covered the story seemed to have far less problems understanding what Lavie was saying, and who he was thanking, and where he was studying in yeshiva.

For example, the Israel HaYom site, which definitely doesn’t hold itself out as any big friend of the haredi world, according to any parameter you care to mention, clearly stated in their coverage that Lavie was studying at the Kollel Chatzot of the Shuvu Banim yeshiva. They also mentioned Rabbi Berland in their story on a number of different occasions.

Another secular news site, Kan Hadashot, had on their Twitter feed a 54 second clip of Lavie saying: “I want to thank the Creator of the World and his faithful shaliach, HaRav Eliezer Berland” and mentioning Rabbi Berland by name, and also saying that everything was in the merit of the pidyon.

Rabbi Selma goes through the coverage of the story in detail in his video.

If you understand Hebrew it’s useful to watch it, so you can start to grasp some of the ways the media has been manipulating the public with their fake news coverage of Rabbi Berland and his community.

“When I was little, they used to tell me that the only thing they ever got right in the papers was the date,” explains Rabbi Selma. “It seems that having been caught red handed on a number of previous occasions, the secular media has learned that their lies can be easily discovered by cross-referencing with other sources, which can badly damage their credibility.”

Rabbi Selma ended with a plea to the haredi media:

“All the haredi, or orthodox journalists out there, please don’t act in such an amateurish fashion. Please learn from your secular colleagues [that you can be easily exposed when you distort the facts], and then perhaps you will come across as more trustworthy.

Otherwise, no-one is going to continue to believe a single word that you write.”

[1] This is a play on the words Shuvu Banim, which is taken from this passuk: Shuvu Banim shovavim v’shuvu b’teshuva.

You can also hear Gavriel Lavie giving an interview on Radio Kol Chai, HERE, in Hebrew.