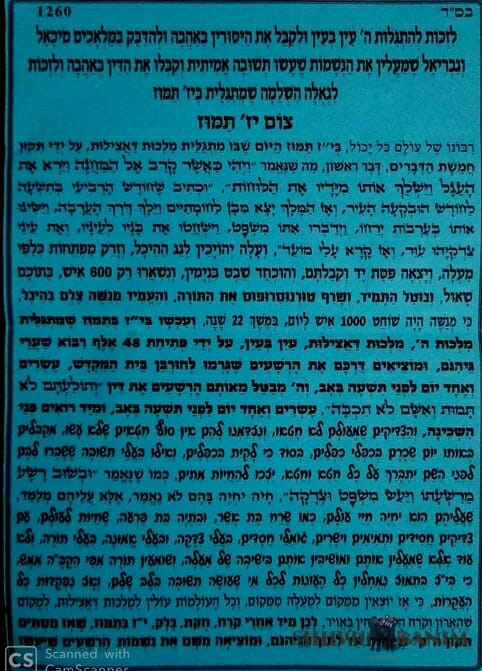 Rabbi Eliezer Berland’s Prayer for the Fast of Tammuz, 5779 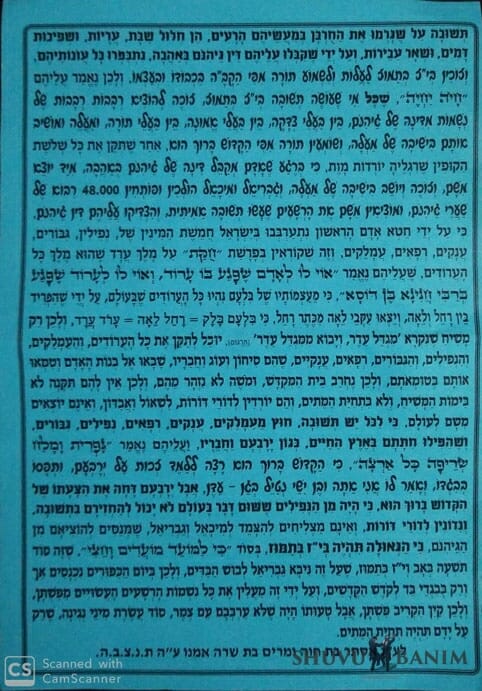 Ribono shel olam, Master of the World, who can do anything.

On the 17th of Tammuz, today, when the malchut of atzilut is revealed, by way of the tikkun of the five things, namely:

And now, on the 17th of Tammuz, when we see the malchut of Atzilut eye to eye, by way of the 48 thousand myriad openings of the Gates of Gehinnom, by way of which the reshaim who caused the destruction of the Temple will be brought out, 21 days before Tisha B’Av.

And Hashem will nullify from upon these reshaim the judgment of “their worms will not die and their fire will not cease”.

21 days before Tisha B’Av, and immediately we will see the face of the Shechinah.

And the Tzaddikim who have never, ever sinned, and who were offered endless opportunity to sin which they never did, will receive on that same day their due earnings, multiplied many times over, as per the secret of: “that you will receive multiplied”.

And those baalei teshuvas who break their hearts before Hashem Yitborach over every single sin they do, will merit to the revival of the dead, as it says: “and the rasha will repent from his wickedness, and judgment and tzedakah will be made upon them, and he will live”.

“Upon them” teaches that he will live forever, like Serach bat Asher, and Bitiya bat Pharoah, who lived for eternity, together with Tzaddikim and Chassidim who are pure and straight, people who do kindnesses and people who give tzedaka abundantly, and baalei emuna and baalei Torah[2].

And not only that, but they will be raised above and placed in the yeshiva shel maalah (the upper yeshiva), and will listen to Torah from the mouth of Hakadosh Baruch Hu, mamash.

For on the 17th of Tammuz, all the sins of those who make teshuva with their whole heart will be erased.

And then all the barren women will conceive, for then will come out from that upper place from its place, and all the words will rise up to malchut d’Atzilut, to the place where the Holy Ark and Korach used to fly in the air.

And so immediately after Korach-Chukat-Balak – we have the 17th of Tammuz.

And then, the tikkun of the letter ק will be completed, which will descend into Gehinnom, and bring out from there the souls of the reshaim who have made teshuva, for their bad deeds that caused the destruction of the Temple. These [sins] include chillul Shabbat, immorality, and bloodshed, together with the rest of the sins.

And by way of their accepting upon themselves the judgment of Gehinnom with love, all their sins are transformed, and they merit on the 17th of Tammuz to ascend and hear Torah from the mouth of HaKadosh Baruch Hu Himself, in His glory.

And then it will be said about them “they lived and they will live”, that all those who make teshuva on the 17th of Tammuz will merit to bring out myriads and myriads of the souls from the judgment of Gehinnom, including baalei tzedaka, and baalei emuna, and baalei Torah, and will raise them up and seat them in the upper yeshiva.

And they will hear Torah from the mouth of HaKadosh Baruch Hu, after the three ‘kufs’ (letter ק) of “her legs descend to Gehinnom” have been rectified.

Because the moment that a person accepts the judgement of Gehinnom with love, he immediately gets out of there, and he merits to sit in the upper yeshiva.

And Gavriel and Michael go and open the 48,000 myriad gates of Gehinnom, and take out the reshaim who have made true teshuva, and who have vindicated the judgment of gehinnom [that was placed upon them].

For, by way of the sin of Adam HaRishon, the five groups of Nephilim, Gibborim, Anakim, Rephaim and Amalekites[3] became mixed up within Israel.

And this is what we read about the King of Arad in Parshat Chukat, that he was the king of all the arodim, about whom it is written: “woe to the person that encounters an arod [poss: viper] and woe to the arod that encounters Rabbi Chanina ben Dosa.”

For all the arodim in the world came from the bones of Bilaam, by way of his separating between Rachel and Leah, and the heels of Leah were taken out of the crown of Rachel.

So, only Moshiach, who is called the ‘Migdal Eder’ and ‘who comes from the Migdal Eder’ can rectify all the Amalekite arodim, and the Nephilim, and the Gibborim, and the Rephaim and the Anakim, who are Sihon and Og and his company, who came to the daughters of man and sullied them with their spiritual impurity.

And so the Temple was destroyed, and Moshe was not beware of them, and so they don’t have reparation, not in the days of the Moshiach, and not at the revival of the dead.

And they will descend, until the end of the generations, to sheol and avdon, and they will never ever come out of there. For everyone can make teshuva, aside from the Amalekites, Anakim, Rephaim, Nefilim and Gibborim. And when fear is destroyed in the eretz hachaim, for example [what happened with] Yerovam and his company, about whom it is said: “sulphur and salt burn all the land”.

Because HaKadosh Baruch Hu wanted to judge Yerovam favorably, and He caught him by his garment and said to him:

“Me, you and ben Yishai will walk together in Gan Eden”,

But Yerovam rebuffed Hashem’s advances, because he was from the Nefilim, and nothing in the world could bring them back to make teshuva, and they will be judged until the end of the generations, and they won’t be able to successfully become attached to Michael and Gavriel, who will try to get [them out] of Gehinnom.

For the geula will be on the 17th of Tammuz, in the secret of:

“A time, and times and a half,” which is the secret of Tisha B’Av and the 17th of Tammuz, about which Gavriel prophesized ‘dress in linen’.

And so on Yom Kippur, they enter [the Holy of Holies] only in linen garments.

And by way of this, all the souls of the reshaim that were from the pishtan (flax seeds of Cain) were elevated, and this is why Cain sacrificed flax seeds. But his error was that he didn’t mix this with wool, the secret of: ‘Ten types of melody’.[4]

Because only by way of these [melodies], will there be the revival of the dead.

[1] A Roman governor who lived at the time of Rabbi Akiva.

[3] These five types refer to the five types of Erev Rav, as defined by Rabbi Shimon Bar Yochai in the Zohar.

[4] Possibly a reference to the 10 Psalms that make up the Tikkun HaKlali, as revealed by Rebbe Nachman of Breslov.

Prayer to heal the leg

Kalman Wiseman - January 27, 2020 0
Rabbi Berland's Prayer To Heal Sores The following is translated from Rabbi Eliezer Berland’s compendium of prayers in the Refuah Shleimah booklet. To get the prayer in the original Hebrew, you can buy the booklet HERE. Master...
Read more

Prayer to heal the face

Kalman Wiseman - January 27, 2020 0
Rabbi Berland's Prayer To Heal The Face The following is translated from Rabbi Eliezer Berland’s compendium of prayers in the Refuah Shleimah booklet. To get the prayer in the original Hebrew, you can buy the...
Read more

Prayer to become a bride in the blink of an eye

Prayer for polyps to be successfully removed

Kalman Wiseman - January 25, 2020 0
Rabbi Berland's Prayer For Polyps To Be Successfully Removed The following is translated from Rabbi Eliezer Berland’s compendium of prayers in the Refuah Shleimah booklet. To get the prayer in the original Hebrew, you can...
Read more

Prayer to strengthen the spine

Kalman Wiseman - January 25, 2020 0
Rabbi Berland's Prayer To Strengthen The Spine The following is translated from Rabbi Eliezer Berland’s compendium of prayers in the Refuah Shleimah booklet. To get the prayer in the original Hebrew, you can buy the...
Read more

Prayer to have the best eyes in the world

Kalman Wiseman - January 25, 2020 0
Rabbi Berland's Prayer To Have The Best Eyes In The World The following is translated from Rabbi Eliezer Berland’s compendium of prayers in the Refuah Shleimah booklet. To get the prayer in the original Hebrew,...
Read more

Prayer to close the eyes to this world

Kalman Wiseman - January 25, 2020 0
Rabbi Berland's Prayer To Close The Eyes To This World The following is translated from Rabbi Eliezer Berland’s compendium of prayers in the Refuah Shleimah booklet. To get the prayer in the original Hebrew, you...
Read more

Prayer to guard the eyes and feel good

Kalman Wiseman - January 25, 2020 0
Rabbi Berland's Prayer To Guard The Eyes and Feel Good The following is translated from Rabbi Eliezer Berland’s compendium of prayers in the Refuah Shleimah booklet. To get the prayer in the original Hebrew, you...
Read more