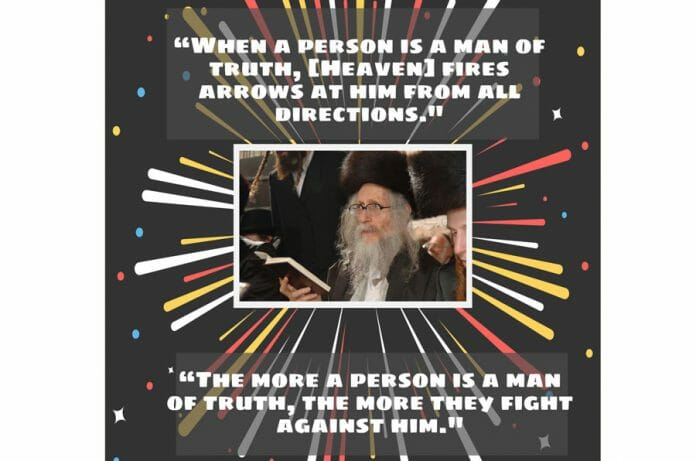 The following words “Man of Truth” were taken from one of the more recent discourses of Rav Eliezer Berland, shlita:

“When a person is a man of truth, [Heaven] fires arrows at him from all directions. And the more that you are a man of truth, the more arrows will be fired at you. They’ll make more controversies (machloket) around you, and people will talk more lashon hara about you.

“King Hezkiyahu was worthy of being the Moshiach, that’s why Sennecheriv was sent against him… in order to wage war against him…These harmers came because [Hashem’s name] YKVK was damaged. The arrows were aimed at the ‘man of truth’ (Hezkiyahu), because the more truth a man has in him, the more Hashem tests him, in order to see whether he will be broken and fall into despair, God forbid, or whether he will strengthen himself with emuna.

“The more a person is a man of truth, the more they fight against him.

“Sennecheriv came to Jerusalem with all of his soldiers on the eve of Pesach, and Hezkiyahu said: “I’m going to do my Pesach Seder as I normally do (and go to sleep at the end of it).” Sennecheriv didn’t even exist [for him], there was nothing else except Hashem Yitborach.

“It’s like what Miriam said to her father, Amram, when he decided to divorce Yocheved: “Abba, there is no ‘Pharoah’! Pharoah doesn’t exist!” If Amram had been able to stand up in the test, and hadn’t divorced his wife, he would have completed the full rectification [of the world].

“Hashem was pleased that there was the decree of Sennecheriv, and that [Sennecheriv] came to Jerusalem with his soldiers. But after that, he was destroyed. This is also relevant in terms of the tzaddik. It’s not appropriate to pray that all the machloket and the lashon hara against the Tzaddikim will stop. These things will come against them in huge amounts, just as Sennecheriv came against Jerusalem.

“Instead, we need to pray that the light of the Tzaddik will be revealed. Hezkiyahu was certain that everything was just an illusion, and that Sennecheriv and his soldiers didn’t even really exist. In order to increase the miracle, Hashem brought them to Jerusalem, and there He turned them into dead bodies.

“When a person is a man of truth, it gives Hashem satisfaction that wars are being waged against him.”