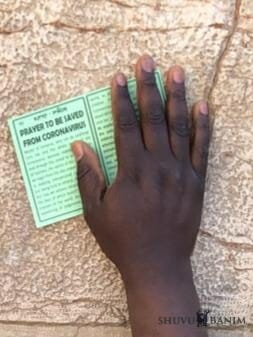 For the last few years, there’s been a familiar pattern occurring for regular geula watchers.

On the one side, we see some tremendously holy people, tzaddikim, kabbalists, telling us that very soon, the whole world is going to dissolve into chaos because of a war / epidemic / nuke / some other disaster.

And that this is a very necessary part of the whole geula process.

And then, it doesn’t happen.

Time and time again over the last decade, there have been predictions made by authentic, holy kabbalists who truly do see the harsh decrees being formulated in Heaven before they hit the world. Many of these predictions have been very detailed, and have come with specific timelines and deadlines.

And yet, nevertheless, they haven’t happened.

Because Rabbi Berland is sweetening things.

I remember 10 years ago, when me and my husband were very close to Rabbi Shalom Arush, shlita, that he used to hint a lot about a couple of tzaddikim who were holding the geula process off, so that more of the Jewish people could climb aboard.

I used to wonder who they were… and then, about 4-5 years ago, I started to hear about Rabbi Eliezer Berland, and then I realized that this was who Rav Arush had been hinting about.

Before he passed away, someone asked the Milkman, Rabbi Chaim HaCohen Perachia, about all the harsh decrees he’d foreseen for Am Yisrael, and why none of them had ever materialized. He replied that there was a rabbi and his community who were sitting in Jerusalem, and sweetening everything, and changing the whole picture – i.e.

In so many ways right now, it feels like we’re going through some sort of re-tread of what was happening back in 2013-4, which was the last time the world mamash felt like it was about to plunge off the side of the cliff, and Moshiach was going to appear.

Instead, the spiritual darkness intensified, hester panim took over totally – and the Rav began his years of harsh persecution and exile to take the brunt of all the harsh judgments that had been slated for planet earth.

And it’s all happening all over again.

After Purim, I surfed over to ravberland.com to read the latest, and saw the post with the predictions from Rabbi Yoshiyahu Pinto, shlita, another superlative tzaddik and holy kabbalist.

Again, we’re apparently looking down the muzzle of a massive war, and the trigger is supposed to be pulled some time in the next two months, chas v’shalom.

Here’s the full text of what Rav Pinto said, in case you missed it:

“We are on the way to geula (redemption) – there will be a big financial crisis. The world is entering a period of time that is really not simple.

“And this situation is not going to end in a day or in a week, rather this is going to continue alongside Am Yisrael, and with the world, for a good few more months.

“HaKadosh Baruch Hu is shocking the world during this period of time, and the world is going to undergo a lot of shocks.

“And you should know, that this is something serious!

“Whoever strengthens himself in a very strong way, to go in the path of Hashem, and to strengthen himself with all his power to go in the way of the Torah, and to have yirat shemayim, the fundamentals that we’ve spoken about – they will be saved from the birth pangs of the Moshiach.

“And whoever doesn’t go in this path, they will be like water – rising and falling, falling and rising.”

I read that and honestly got a little shaky.

Because how much more koach are we meant to have, to deal with all this ongoing uncertainty? I don’t know how anyone made it through World War II, but I can tell you that whatever ‘tough stuff’ that generation was made of, we just don’t have it.

I read about people panic buying toilet paper and I don’t even know what to think, because I’m personally way more concerned about basic food running out, than I am about not having handfuls of three ply Kleenex plentifully available.

I don’t know exactly when Rav Pinto made his comments, but two months takes us up to L’Ag B’Omer.

That was the question I was pondering when I first read this yesterday, and again this morning.

What do I do, tachlis? What can a small person like me really DO, about any of this?

Because we all know stockpiling is just a reaction to try to retain some semblance of control, and at best staves off disaster for two weeks. At best. And we all know that all this other stuff we’re being told to do, like staying a metre away from every other person on the planet, and obsessively squitzing on hand sanitizer, and gulping down massive amounts of Vitamin C – really?

These are really all just distractions, mostly pointless actions to try to help us feel like we’re in control.

God is in control. And nothing and no-one else

And that is the message that is slowly being reinforced with greater power and strength with each day that passes.

Just now, my brother from the States called me to tell me all his travel plans have been cancelled. I was meant to be seeing him in London, at another brother’s celebration, and then two weeks later we were meant to be doing Seder Night together for the first time ever, in Jerusalem.

And neither of us know when we’ll be able to really see each other again.

All the certainties are out the window. My brother lives in New York State, and he told me Purim was pretty weird, this year, as the panic slowly settled in and everyone started worrying about what germs they may be coming into contact with.

Another friend from Israel just called me to tell me the queues in Rami Levi are out the door, and that you can feel the panic in the air. She told me: “It’s contagious. And just buying paper towels and bottled water is not making it go away.”

This test is one of emuna, and emunat tzaddikim, dressed up in the clothes of the Coronavirus outbreak.

Sure, you can also stockpile tuna if you want, if that makes you feel better. But really, the only thing that is going to take the sense of mounting panic away is to work on believing that God is doing everything; to make some serious teshuva about the way we are treating other people, especially our kids, and to stay close to the Tzaddik HaDor, Rabbi Eliezer Berland and to do our best to help him in his endeavors to get this sweetened.

All this brings us back to the question:

What can people as small as you and I really do, while all this madness gathers around us?

And here’s the answer:

All we can do is stay close to the true tzaddikim, especially Rabbi Berland, and to do what he says.

Because wherever circumstances are heading, this is already too big for me to handle on my own.

Rabbi Berland recently requested that we should say 7 Tikkun HaKlalis every day until Pesach. Even if we can’t say 7, every single additional Tikkun Haklali recited helps to make all the difference.

The Rav also requested that we should say the names of the 12 precious stones on the ephod 7 times a day, too, as follows:

You can read more of Rivka’s musing over on her blog, at www.rivkalevy.com