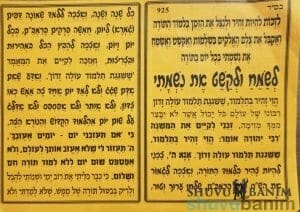 The Way to be Saved from the Decree of Destruction

Over the last week, Rabbi Eliezer Berland, shlita, has made many references to an impending and terrible decree of destruction, that he can see looming ahead.

Over the last years and months, Rabbi Berland, shlita, has made many references to the threat from Iran, and the threat from the other groups, terrorists, and enemies on Israel’s borders, and around the world.

Last week, Rabbi Berland made the following statement, as part of the new batch of prayers in connection with a new schedule of learning that he’s asking his followers to learn, for the success of the Jewish people:

In that prayer, Rabbi Berland said:

“We must study five chapters of Rambam, and eight pages of Gemara, because there is going to be a terrible holocaust, and whoever holds by this holy learning schedule will be saved.“

Many people have already taken it upon themselves to commit to this schedule of learning, and challenging as it may seem, we urge as many of our readers as possible to make every effort to try to follow this learning schedule, too.

Rabbi Berland said that a siyum would be held on Shas (which can be completed within a year, if 8 pages are learned a day, as opposed to the single daf yomi, which takes seven years as a it learns a page a day) and also the Rambam, on the yahrtzeit of Rebbe Nachman of Breslov on Succot next year, 5781.

Below, we bring the original prayer containing Rabbi Berland’s dire warning, and also his blessing for as many people as possible to avert the harsh decrees via their learning: 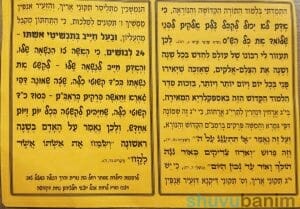 THIS IS RABBI BERLAND’S LEARNING SCHEDULE FOR THE NEXT FEW WEEKS: