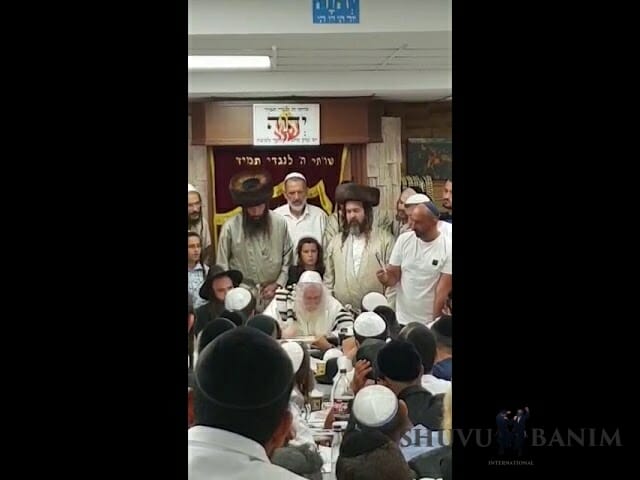 Break your i-Phones if you want Moshiach to come

Motzae Shabbat, June 30th 2018, and Rav Eliezer Berland, shlita, was the guest of honor at the Melaveh Malka meal at the Beit Rabbenu synagogue in Bat Yam.

As is his custom, the Rav was giving over some awesome words of Torah when he suddenly started yelling with great passion and enthusiasm:

“If you break your i-Phones now, Moshiach will come immediately!”

Rav Berland has spoken out on the topic of i-Phones, and how they are delaying the geula (redemption) on a number of times in the past, including THIS POST from last year, where Rav Berland discussed the topic of banning all i-Phones from every Breslov institution with Rav Aharon Feinhandler.

Afterward his meeting with Rav Berland, Rav Feinhandler commented that:

“The Rav came out strongly against the so-called ‘kosher’ smart phones, when he said that there’s really no difference between a ‘kosher’ (i.e. filtered) phone and an ‘obscene’ one (i.e. one that doesn’t have a filter.)

“Every place that I come to, I tell people about Rav Berland’s holy advice. He’s a man of truth, who only wants for Am Yisrael to succeed and to be holy. He wants to rescue Am Yisrael from all the terrible spiritual decline that is [smartphones].

“Many of the Gedolei Israel (spiritual leaders of the Jewish people) have described the situation today as being a true spiritual holocaust, inasmuch as causing people to sin is worse than actually murdering them.

“After all, how many ‘stumbling blocks’ are arising dafka from these ‘kosher’ phones? These devices [i.e. smartphones] are guaranteed to trip people up and cause a spiritual breakdown, or the filter suddenly stops working all by itself. These devices are addictive – and ultimately, a person [who uses them] becomes someone who’s indistinguishable from a chiloni (completely secular Jew).”

May Hashem give us the ratzon (will) to free ourselves from our i-Phones, and the ability to bring Moshiach now, the sweet way.

The Midrash says Moshiach will sit in jail – Rabbi Lugassy

WEBINAR RECORDING 9 – Growing beyond our immature understanding of Moshiach