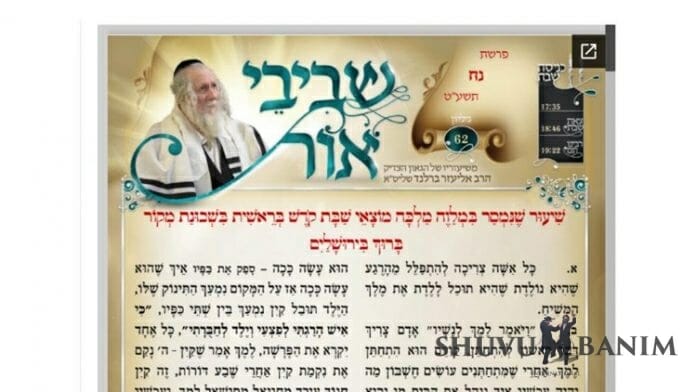 Excerpt of a shiur that Rav Eliezer Berland gave over in Rosh Hayin, at the home of someone who successfully came through a very difficult operation.

Rav Berland: It’s a wonder. The body works like the sort of machine that a million scientists couldn’t put together, they couldn’t even produce an example of something like this. If something is missing, even just one single thing, then it’s impossible to stay alive. We’re old, already, and the body is starting to get a bit rusty. We have to thank Hashem.

The invalid: It was mamash siyatta diShmeya (Divine Providence), throughout the whole operation, etc.

Rav Berland: Yes. “Thank Hashem, call out in His name,” “Talk about all of His wonders.” It’s impossible to really understand this miracle [of the human body]. We see that throughout a pregnancy, throughout the birthing process, that the body is built. It’s truly a wonder! You have been rebuilt anew.

There were two days were you were unconscious, and all of us were trembling from worry about what was happening to you. Mamash, you were taken out of the hands of the Angel of Death, and you came back down [to earth] anew. Now, you are going to be healthy.

The invalid: I still need a lot of siyatta diShmeya…

Just accept Hashem’s will with love

Rav Berland: All you need to do is to accept whatever Hashem is doing with love, and then it will be possible to live until 120. All we need to do is just submit to how Hashem chooses to run the world. Not to fight [against Hashem], and to just let Hashem to guide you however He wants to, and to see Hashem every single moment. To see the miracles that Hashem is doing every single second.

The invalid: This vision [of good health] should come quickly!

Yes, but we need to have a little patience.

This is what Hashem is really asking of us.

Translated from the ‘Sparks of Light’ Newsletter