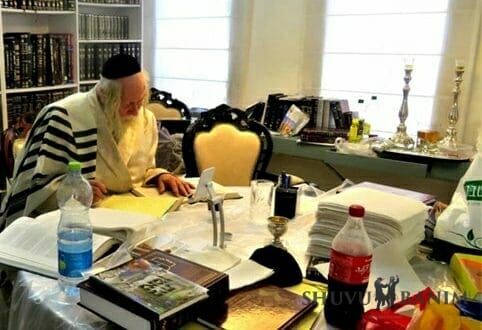 A new shiur which our Rebbe Rav Eliezer Berland shlit”a read out to his attorney in prison and requested that it be released to the public.

“The eight days of Chanukah come to nullify the power of the eight Kings of Edom.”

“Chanukah is the letters ChaNU – KaH (numerical value=25) — in the verse ‘Shema Yisrael’ there are 25 letters, because the Maccabees ascended to the tomb of Shmuel HaNavi, because from there the entire view until Tel Aviv is visible; the entire plain is visible.  The Maccabees, the Chashmonaim, were on the mountain above and saw the Greeks advancing from Greece.  There’s nowhere to be; from Yaffo, ships are arriving, and each ship is full of soldiers.  100,000 Greek soldiers are approaching Jerusalem.

“It took them three days by foot to reach Jerusalem.  When they reached Latrun, the Maccabees saw them through the place of Shmuel’s tomb.  They saw the soldiers arriving with giant elephants.  The Maccabees fled.  Only Yehuda [Judah Maccabee] remained with another 300 soldiers.  He screamed ‘Shema Yisrael’ many times, [because?] the verse has 25 letters.

“The Maccabees saw that the elephants were beginning to go wild amongst them.  The situation became dangerous, and the elephants that brought the Greek soldiers killed those same soldiers.

“Latrun was the place where all the encampments set camp before ascending to Jerusalem.  Shaar Hagay [Valley Gate] is a narrow place.

“In Chanukah, all the Maccabees etched onto their flags ‘Mi Kamocha Ba’elim Hashem…’ — Who is like You amongst the mighty ones Hashem,’ the initial letters [of which] are MaKaBYM.  Matityahu shouted, ‘He who is for Hashem — [come] to me,’ because the moment that Matityahu, the father of Yehuda and Elazar, killed in Modi’in the Greek officer who took out a pig and told him to sacrifice it for the Passover offering; Matityahu pulled out his sword and decapitated the Greek’s head.

“During this period, in all of Modi’in there were Greeks, the Greeks who came from Syria and accepted onto themselves Greek culture.  The revolt began in the year 64 B.C.E. and lasted for three years.  The first war was against Apollonius, and Yehuda cut off his head.

“The Maccabees entered Jerusalem and purified the Holy Temple from all signs of Greece that were in it — a pig, and [they] lit the candles.  There was one oil container, and until they made new oil [would] take eight days, because they would need to bring olives from the Galilee, to harvest them, and this took eight days.  Therefore, every Chanukah, every single year, the light is greater and greater, and it’s possible to see miracles and wonders.”

“Through the Light of Chanukah, Chana Brought Down the Soul of Mashiach” – Rabbi Eliezer Berland shlit”a