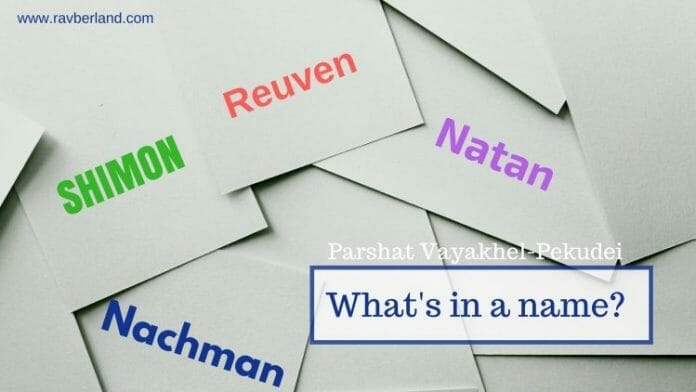 “Hashem has proclaimed by name, Bezalel son of Uri son of Hur”

The holy Zohar tells us that a person’s whole strength comes from his name: “Hashem has proclaimed by name, Bezalel son of Uri son of Hur”. Betzalel’s name is betzel (shelter) E-l (of God). We can already see in the name that his father gave him a hint that he would be the one to build the Mishkan (Tabernacle).

So the Zohar tells us in its commentary on Pekudei that it was only thanks to his name that he was chosen to do the Mishkan.

His name was the only reason he merited to do this, as opposed to any other man.

At 13-14 years of age, he already built the Mishkan and he knew things that even Moshe Rabbenu didn’t know. Moshe wanted to do the Aron (holy ark) and only afterwards the Mishkan, but Betzalel said: “First do the Mishkan, and then do the Aron.” Moshe said to him: “You truly were a ‘shelter for Hashem’!” So there were things that in a manner of speaking, Moshe didn’t know and that Betzalel did.

Hashem decreed names at the creation of the world

A person’s name arouses an upper spiritual strength for a person, and with this strength, this energy, he can do wonderful things.

If you give a person the name of a tzaddik, that name will also cause the child who bears it to become a tzaddik. By giving a child the name of a tzaddik, you are arousing the light of that tzaddik that he is being named for. That light from the upper worlds is aroused, and comes down and washes over that child throughout all of his life.

Names are not simple matters

A person’s vitality comes from his name

It’s very worthwhile that each person should know about which tzaddik he is named after, because a person’s life will go according to his name. A person needs to live in accordance with his name. All the vitality of a person comes from his name.

This is why when a person rises up [to the upper worlds after his death] they ask him: “What’s your name? You didn’t live according to your name! You should have gone in the direction dictated by your name! If you’d acted in accordance with your name, you would have achieved everything in the world!

In Gematria, Shlomo HaMelech is 470, and Mikdash (Temple) is also 470. Shlomo came to the world to build Hashem’s Temple. King Shaul came to kill Agag, the King of the Amalekites. Shaul in Gematria is 337, and Agag Melech Amalek is 337.

So a person’s name hints to all the matters connected with him, and everything that he needs to do, and all the jobs he has to complete in this world.

Help your child to become a tzaddik

The Noam Elimelech (Rabbi Elimelech of Lizhansk, z”tl) says that the names of the Tzaddikim are greatly reduced. Hashem has a treasure trove of Tzaddikim, but [in this world] they are very few and far between. Who will merit to have the names of these Tzaddikim?

If a person wants his child to be a Tzaddik, first and foremost he should name him after a Tzaddik, this is the first thing to do. The bigger a tzaddik you name him after, the more likelihood there will be that the child will become a tzaddik himself.

If you’re going to choose a name for a child, seek out the biggest Tzaddikim, and then maybe, just maybe, this will guard the child. After you’ve given him his name, then you also need to educate him, and protect him, and not just to go to sleep on Shabbat. Rather, you should sing Shabbat zemiroth (songs) with him.

And this is what the Noam Elimelech says, that when you give the child the name of a tzaddik, that tzaddik will watch over him, and guard him from bad friends and bad things. The soul of the tzaddik will accompany the child every place he goes.

The moment that you name someone after a tzaddik, a soul spark from that tzaddik attaches itself to the child.

You need to have the intention that this name, that this tzaddik’s soul, will be revealed within the child, and will guard him, because the tzaddik already sanctified this name, and already served Hashem in accordance with this name, and this will cause the child to also grow into a tzaddik.