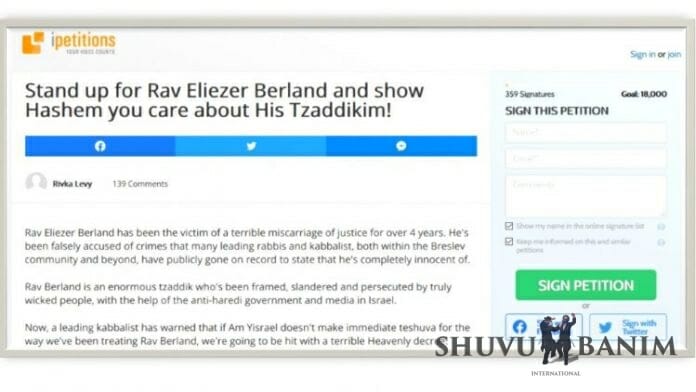 One of my online buddies just sent me an email with a link to the petition to free Rav Berland that I set up three years ago….

At that point, I ambitiously set a goal of reaching 18,000 signatures – one thousand times ‘chai’ – for the petition. One in a Generation I had just come out, and I foolishly believed that having all the facts set out in book form would convince enough people to throw their weight behind the Rav.

Ah, how naive and foolish that seems now.

In the subsequent years, I’ve learned so much about ‘confirmation bias’, and how people will cling on to the lies they tell themselves with the very last shred of their dignity and ego, even when it’s costing them so much to carry on doing that.

Just look around, at all the people still wearing face masks and obsessing over ‘social distancing’ rules that are essentially totally pointless, and also totally unscientific.

Or, take a look at all the people who are still discussing politicians and ‘peace processes’, as though the whole world didn’t just change, massively, overnight, in the wake of Covid-19.

It’s hard to let go of our opinions.

It’s hard to admit we were wrong about something.

It’s hard to eat humble pie under any circumstances, but especially in our age of social media, where we loudly tweeted, emailed or messaged everyone our latest take on things – and maybe, just maybe, it was totally wrong.

Anyway, so my online buddy sent me an email reminding me of this petition that I set up three years ago, when only a couple of hundred people were brave enough to sign it, decrying the awful treatment Rav Berland was receiving in an Israel prison.

Three years on, and it’s as though that same petition could have been written about what’s going on again today.

I’ve seen over and over with the Rav, that everything has its time. And who knows, maybe now is the time to try to get this petition up to 18,000 signatures, and to fulfill what that famous Rabbi said, just a few days ago, that we should be lawfully protesting any way we can, the death sentence that the Israeli authorities have effectively handed Rav Berland.

I know it’s hot out there.

I know you’re tired from months of bidud and quarantine and stress.

But just like everything else is being done ‘virtually’ today, at least at the moment, this is a golden opportunity to spend precisely 3 seconds showing your support for the Rav and doing a bit mitzvah that can’t really be measured in ‘our world’ terms.

As I wrote on my own blog, HERE, protesting on behalf of the Rav is probably one of the most potent forms of spiritual life insurance you can take out, at this point in time. And you can get it from your armchair, with just a couple of clicks of the mouse!

Level 2 is to take a deep breath, and to send the link to sign the petition out to everyone you know on social media.

Even now, even today, when we know just how fragile the world is, and just how precarious our ‘security’ actually is, the ego is still jumping up and down, telling us to just keep our heads down and to avoid getting into any ‘arguments’ about Rav Berland.

But what if you could see just how big a difference even this small action of sharing a link to the petition makes in shemayim?

What if Hashem pulled back the curtain, even just a little bit, and showed you that even the tiniest effort we make down here to protest on behalf of Rav Berland, and to get others to join us, is literally making all the difference between geula b’rachamim, and the opposite, God forbid?

Rebbe Nachman of Breslov tells the story of The Melancholy Tzaddik.

(#16 in the English translation of Rabbi Nachman’s Stories, by the Breslov Research Institute.)

In a nutshell, there is a depressed Tzaddik who decides to really work on strengthening his joy and emuna, and as a result, his soul soars upwards and he finds himself traversing millions and billions of supernal worlds.

But when his joy started to fade, and he started to return to this world, he was shocked to discover that:

He had returned to the exact same place where he had been at first. Looking at himself, he realised that he had not moved at all, or if he had moved, it had been at most by a hairsbreadth.

He had moved so little, that no one other than God could measure it. The tzaddik was very surprised at this. Here he had flown so far, through so many universes, and at the same time, he had not moved at all.

This showed him how precious in God’s eyes is even the slightest motion. When a person moves himself even a hairsbreadth in this world, it can be considered more than thousands of miles, and even thousands of universes.

Who knows, what you’re really doing by signing the petition yourself, and passing it on to others?

We won’t really be privy to that information until Moshiach is openly revealed, and so many of these spiritual secrets start to be shared with us.

But I can tell you from my own experiences doing ANYTHING for the Rav: even the smallest effort reaps massive rewards.

So, do your bit and sign the petition here:

And then, swallow your pride, overcome your fear, crush your ego (at least a little….) and pass the link around.

Because when you do that, you might just be the one who’s bringing geula the sweet way.

You can read more of Rivka’s musing on her blog: https://rivkalevy.com/

Give your Matanot L’evyonim directly to the hands of Jerusalem’s poor...