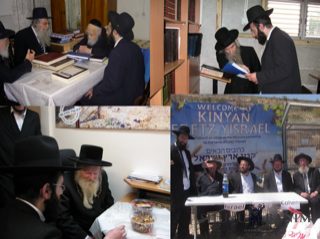 It’s known that we are now standing at the very End of Days, with the Geulah coming closer and closer.

Soon, we will greet Mashiach tzidkenu and enter a completely new phase in our Avodas Hashem.

Rashi points out that right before the redemption, the Land will welcome the dispersed nation by giving abundant produce. Others, like the Ari HaKadosh, stated that there will be a sprouting and dissemination of the secrets of the Torah like we never saw before.

Yet, among all the signs of the redemption we are already witnessing, a new one just emerged, with Rav Berland’s blessings! It behooves us to make proper preparations.

On the 6th of Adar I 5779, the Rav signed the Haskamah to Kinyan Eretz Yisrael (former Kinyan Ha’Aretz). In doing so, he joined many real Tzadikim of our generation like HaRav Chaim Kanievsky Shlita, HaRav Shteinman ZT”L, HaRav Eliyashiv ZT”L, the Lelover Rebbe Shlita, the Bostoner Rebbe Shlita, among others.

You may be asking yourself: what is Kinyan Eretz Yisrael?

Kinyan Eretz Yisrael is the only organization nowadays that enables Jews all over the world to perform 28 Mitzvos HaTluyos Ba’Aretz such as Terumos, Ma’asros, Pe’ah, Leket, Olelos, so on and so forth in the most direct way.

Founded 14 years ago by the Dayan HaRav Meir Leibowitz Shlita, Kinyan Eretz Yisrael sole goal is to increase the merits of the Jewish People and help bring the Geulah b’Rachamim through these unique Mitzvos.

Now, every Jew can, for a small price, rent a plot of 4×4 amos of Land with planted wheat and grapes in order to acquire these merits in Shamayim. Have you ever thought of such a thing? This, by the way, is a 100% halachic Kinyan that is valid for all purposes, and is even recognized by the State of Israel.

The Talmud (Taanis 23a, Moed Katan 16b and others) presents the idea of the the power of the Tzaddik to issue decrees that are fulfilled by Hashem. We saw this when the Rav (like Rebbe Nachman) cancelled many harsh decrees of the generation.

A Haskamah is no different since, in essence, it’s a decree! Tzaddikim don’t waste their time or words, abound in love for Am Yisrael and rule with their fear of Heaven. When a Tzaddik does something, it’s like he’s saying “Master of the universe, this should happen for the sake of your glory!”, and Hashem agrees.

We can’t know for sure what prompted the Rav to just sign the Haskamah when presented to him, but one thing is certain: he saw something connected to the Geulah in it.

Indeed, there hasn’t been an endeavor in such a large scale since the Vilna Gaon sent his talmidim to Eretz Yisrael and entered a similar partnership with them. The Gaon’s last years were solely dedicated to bring the Geulah by sending the first wave of Aliyah and set the foundations for a Jewish settlement in the Holy Land.

Rav Avdimi the son of Rav Yosef said: “From here you learn that whoever properly gives to the poor leket, shikechah and pe’ah is considered as if he built the Holy Temple and brought sacrifices there (see Rashi, Vayikra 23:22)

There’s a special ma’alah that’s acquired only through the Mitzvos HaTluyos Ba’Aretz. There used to be a time when this level were exclusive to farmers, but now it is open to every single Jew!

Our sages have stated in many places the importance of fulfilling these Mitzvos. Below are some of the sources taken from Kinyan Eretz Yisrael’s website:

Kinyan Eretz Yisrael has a team of qualified Rabbis that go once a year to the fields to perform all the pertinent Mitzvos. During harvest time all the members who own their Land are welcome to join the team to perform the Mitzvos themselves.

What better way to teach your children about these fascinating Mitzvos than going on a field trip to the farms? This makes for a unique family experience that every Jew can now have. Alternatively, many people have given these Mitzvos as a wedding and Bar-Mitzvah gift.

Those that go to the fields, can take their own tithed produce home. Those that can’t, will have the Mitzvos performed by the Rabbis. In this case, the all unclaimed produce goes to Jewish families in need.

From Tu B’Shvat until Purim, Kinyan Eretz Yisrael is offering a 1+1 promotion in which you can be mezakeh another Jew.

When you buy a plot of Land of grapes and wheat for 1 year for yourself, you get another one for FREE. All of this for only US$ 260!

We invite you to join us in increasing the merits of the Jewish people and help us bring the Geulah b’Rachamim through these unique Mitzvos! May we all be zoche!