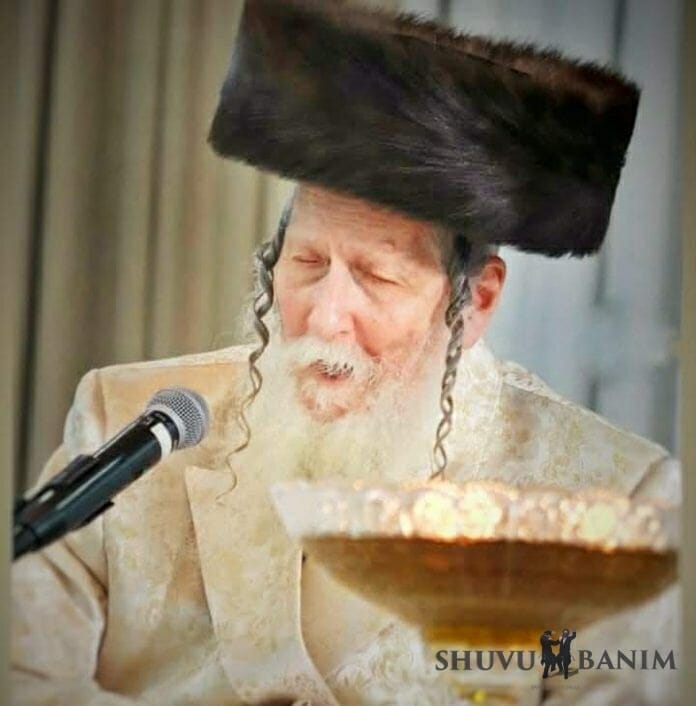 Translated from comments made in Yiddish by Rabbi Eliezer Berland, shlita, performing the mitzvah of ‘comforting the mourner’ by phone from Tzalmon Prison, on the occasion of the petira of Rabbi Aaron Kahan, z’tl, the Divrei Emunah Rebbe of Monsey, brother of the Admor of Toldos Aharon (June 20th, 2020).

Aaron of the generation

This was the 40th year, on the first of the month of Av, in the fortieth year.

He didn’t see the world – he was ‘nothing’ at all [i.e. the intention is that it’s as if he didn’t exist at all, in relation to taking an interest in this world.]. [He only saw] the Beit HaMikdash, only the kodesh kodeshim. His head rested in the Holy of Holies.

His bier flew in the air: “And they buried Aaron”.

No-one wanted to believe that he was niftar (deceased), because truly, a Tzaddik lives forever.

Moshe lives forever, he also is living forever. It’s assur (forbidden) to say that he’s niftar. He’s with us. The Gemara says (Tractate Shabbat, 152a), that Rabbi Yehuda came to his neighbor, who didn’t have any children (i.e. he came to help sit shiva for the neighbor, who was childless.)[1]

Afterward the seven days of the shiva, the neighbor came to Rabbi Yehuda in a dream, and told him yasher koach! (Good for you!) I was there [at the shiva]!

He lives with us, he’s with us now, he’s mamash with us.

Rav says: “Take care to deliver a moving eulogy at my funeral, for I shall be standing there.” (Tractate Shabbat 153a), Whatever is being said, he is saying it. Rav said to Shmuel Bar Shilat:

Deliver a moving eulogy, for I will be standing there!

“On the day of his wedding, and the day that his heart is joyful.”

This is the Beit HaMikdash, and Matan Torah (the giving of the Torah). ‘Wedding’ is Matan Torah. Now there were the first tablets. Yom Kippur is the Second Tablets. Now is the first 40 days. Moshe Rabbenu entered heaven, in the month of Tammuz. Now, he ascended to heaven, they called him to the ‘inner’ heaven.

And thus, he was called Aaron – he was dafka Aaron!

He was Aaron HaCohen mamash, mamash Aaron HaCohen. Mamash. That he would enter the (sanctuary), the holy of holies, the heichal, the DVIR.

A Tzaddik lives forever. “And they saw his bier floating in the air”.

They didn’t want to believe that Aaron HaCohen was niftar, because the first time [at the sin of the Golden Calf], they said ‘Moshe is dead’. (I.e. the Satan fooled them by showing them an image of Moshe’s bier floating in the air.]

And this wasn’t correct! Moshe lived for another 40 years! No-one wanted to believe that Aaron HaCohen was dead, this just couldn’t be. “And he stood between the dead and the living.”

He stopped the plague.

He stopped the plague, that millions of people died from this.

The Admor of Toldos Aharon, shlita:

And also now, that the plague should be stopped.

That we should already be spared from this plague!

“And the Makom (i.e. Hashem) should comfort you amongst the mourners of Zion and Jerusalem.”

Amen. And the Makom should comfort you amongst the mourners of Zion and Jerusalem.

[1] Shabbat 152a: Rav Yehuda said: If a deceased person has no mourners, ten men should go and sit in mourning in his place (i.e. where he died) for the seven days following the burial. There was a person who died in the neighborhood of Rav Yehudah. [The person] had no mourners. So every day following the burial, Rav Yehudah would bring a group of ten men, and they would sit in mourning in his place.

After seven days, [the dead man] appeared in Rav Yehudah’s dream and said to him: “Let your mind be at ease, for you have set my mind at ease.”