And He Releases the Imprisoned

The Tzadik R’ Eliezer Berland shlit”a who has been known as a miracle worker during the past 50 years as the Steipler and other Tzadikim would send people to him for brachos, has continued to save Jews and non-Jews alike in need of salvation during the past 2 1/2 years of him travelling the globe. Here is one such story which occurred recently in Holland and has been publicized in the Israeli religious media.

Another story which was publicized on the “kav hameida” phone line: An Israeli man named “Itzik” who was very far from keeping Torah and Mitzvos, has lived in Holland for 30 years, got in trouble with Dutch authorities and was sentenced to three years in prison or a fine of 1.8 million Euros, to be paid in one lump sum.  His brother, Chezy, who had become religious through Rav Berland several years earlier and has since left all his non-religious activities behin, told him about the Rav’s greatness as a miracle-worker, eventually convinced him to approach the Rav for help getting out of his predicament.  When he did, it was after the court had already ruled on his case, so he asked the Rav to make a miracle happen so they would let him pay the million-Euro fine in payments, since he doesn’t have the money.  If he doesn’t pay, he will go to jail.  The Rav told him to pay a pidyon nefesh (a large amount of charity given to release a person from Harsh Judgement) and said, “No judgment will prevail upon you”.   The Rav also composed a prayer for him to say before the trial.  Meanwhile, he would occasionally visit the Rav in order to learn and grow in Torah.  He told his brother than he could not understand why he was going; his Jewishness had thus far consisted only of donning tefillin once—during his bar mitzvah—and going to synagogue once on the Shabbos before his wedding.  So he could not understand what drew him to make the two-hour drive to learn Torah with the Rav each time.  He still had trouble believing the Rav’s promise that he would walk away from the trial free of any penalty.  The Rav told him to say the Tikun Haklalli (set of 10 psalms to rectify all of a person’s transgressions) and not worry for one moment—he would walk away a free man.  After the appeals trial, the Rav sent someone to the courthouse to tell him to go to the lake near Amsterdam and recite the Tikun Haklalli until the ruling was announced, and he did so.  Just as he completed the Tikun Haklalli, the phone rang and his two attorneys excitedly informed him that the judges had ruled that his penalty should be—nothing!  No prison time, no fine.  He could not believe his ears.  His attorneys later called him again to ask him what he had done to effect this judgment, since it was not their handiwork that brought it about.  They wanted to know what made the judges change their ruling, because they had no idea what it could be! It made no sense!  But he knew—he knew very well what and who had changed the judgment.

This man himself later was interviewed on the “kav hameida” phone line and said how he is so grateful to the Tzadik for saving him, and decided to make a 180 degree turn and to change his life to the better. He has within a month left all his shady work behind and is slowly on the course of becoming an observant Jew.

Please donate in order to help us provide more translations of articles like these (and there are literally hundreds!!!)
The letter and Prayer which Rabbi Berland wrote to Itzik 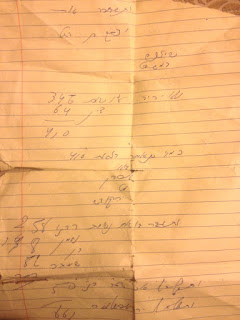 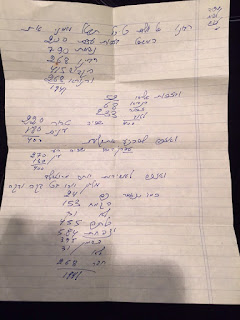