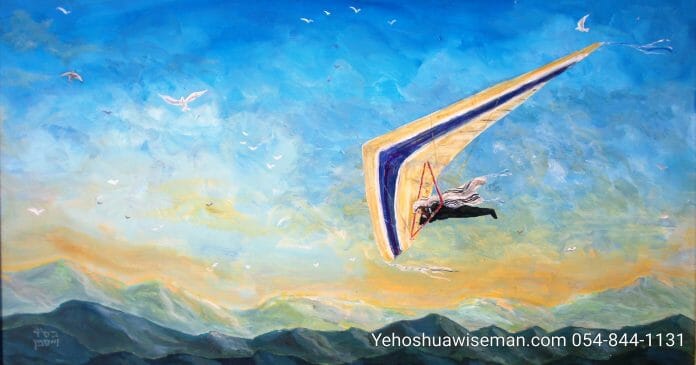 Bringing about miracles through prayer

Rabbeinu HaKadosh says in Torah 97, “Before the creation of the world, HashemYisborach refined and adorned Himself with the prayers of the tzaddikim.” Hashem saw that there would betzaddikim who would be able to do whatever they wished, who could change the systems and laws of nature with their prayers. And this is the impetus forHaKadosh Baruch Hu’s creating the world: for the pleasure that He would get from the tzaddikim who would be engaged in prayer and would change the laws of nature. Even before the creation of the world, Hashem delighted in all the miracles and wonders that each person would bring about with his prayers, and this was His pleasure and delight, and this is the reason that He created the world. And this, Rabbeinu continues, “is the explanation of ‘for me is Gilad’: that the pleasure that Hashem had before the creation of the world should be revealed.” “Gilad” refers to the revelation of his refinement (“gilui ha-eidon”), the revelation of his pleasure, because there is no pleasure as great for Hashem Yisborachas when he sees how a person is using prayer to achieve his desires and draw miracles and kindness into the world.

If a person wants to change nature and do miracles, he needs to pray with humility and a sense of his own lowliness. He needs to have focused intention and to feel that “I am a small person, smaller than every other Jew in the world.” Then, he can do anything he wants to through prayer. This is the secret of why Yosef called his son “Menashe,” because “Elokimhas made me forget all my hardship and all my father’s household.” How can we seemingly understand Yosef? How could he give a name like Menashe to his son, a name whose meaning is, “I forgot about my father. I forgot about my brothers, from all the mothers. I forgot everyone—the entire house of my father?” Could Yosef give a name in order to forget his father? Only according to that which Rabbeinu explains in Torah 97, can we understand this secret: Yosef merited reaching the level of “Menashe,” which is humility and a sense of lowliness. And this is the explanation of the verse, “Elokimhas made me forget all my father’s household” meaning his yichus, “and all my hardship,” that he worked hard to serve the Creator. A person strengthens himself in prayer, in avodas Hashem, because he has an important father, an important mother, and important grandfather, but Yosef HaTzaddik said, “I serve Hashem.” I am not praying because I have an important father or grandfather. I am praying for Hashem’s sake! My strength comes from the fact that Hashem created me, from the fact that there is a G-d in the world. Hashem Yisborach is alive and exists! I see Him alive and existing and so I serve Hashem. Yosef drew his life force from Hashem, and this is how he achieved all of his levels. And this is why he called his son “Menashe,” in the language of forgetting. “I forgot all my hardship and all my father’s household.” To merit powerful prayer which can create miracles in the world, a person needs to forget his yichus and all his work in avodas Hashem.

Rabbeinu revealed that there is such a power in the world, which is the power of prayer, and with this power a person can get whatever he wants, everything. And every single Jew can reach this level, of control through his prayer. “Your nation is all tzaddikim.” This applies to each and every Jew, because every Jew can achieve through prayer, because every good thing that a Jew wants he can achieve. Every Jew can bring about miracles and wonders through prayer. This is the purpose of creation. This is Hashem’s will, that each and every person will bring about miracles ad wonders. Hashem is the Master of Miracles. Hashem is the Master of Wonders. He intended this even before the creation of the world. All of the miracles and salvations Hashem prepared before the creation of the world, but in order to reveal them, to activate them, to bring them out of hiding and into the open, we need prayer. If we don’t pray the miracles won’t happen. Hashem prepared for everyone unlimited miracles and wonders. Prayer is the strongest thing in the world. There is nothing stronger than prayer. No gate is sealed closed before prayer. There is no force that can stop prayer. Prayer is like knives and swords which can rip apart the heavenly firmament and all the barriers. All your salvations are prepared and waiting. Everything is ready. Just ask, pray, and Hashem will hear you! Every Jew should have an unlimited number of miracles. You just need to pray and request.

Hashem stipulated with each act of creation, before the actual creation of the world, that when a Jew would stand and pray, he would be given everything he asked for. Hashem stipulated with the sea, even before the creation of the world, that it would split for the Bnei Yisrael. Hashem stipulated with the fire, and said, “Know that there will be Chanania, Michael and Azariah, and you do not have permission to burn them.” When Hashem created the lions on the sixth day, he said to them, “I am creating you on the condition that you do not swallow up Daniel, and you shouldn’t swallow up any tzaddik.” He made this condition for every lion in the world, for all the generations, that if a Jew would stand and pray then no lion has permission to touch him. So, Hashem made conditions before the creation of the world that everything that a person would ask for, everything that he would pray for, Hashem would give him. You want an apartment, wealth, health, children? Hashem will give you everything, if you just pray. Open your mouth: everything is promised to you. Even before Hashem created you, he already prepared everything for you, all the miracles, all the salvations. Just know that the channel is prayer; the vessel is prayer.

Every day Hashem makes a new prevention for a person—a new problem, a child who is sick, a sick wife, lack of income. It is all in order that a person should pray. The result will be a miracle followed by another miracle, etc. This is why Hashem created the world, so that there should be miracles and wonders. The work of every Jew is to feel as if he is non-existent, to be completely cancelled to Hashem. It is hard for a person to pray, because it is hard for him to be cancelled to Hashem. It is hard for him to humiliate himself before Hashem. A person thinks, “How will Hashem help me? Will he give me an income? I’ll manage on my own. I have brains. I have two hands. I have two legs. Do I need Hashem?” This is terrible! The curse, “the snake will eat dust,” refers to such an attitude, because the snake doesn’t need to pray and doesn’t need to request. And this is essentially the punishment of the snake, that wherever he goes he finds food. The food is ready for him like dust, and he doesn’t’ need to pray. All the animals cry to Hashem, “like a deer yearning for rivers of water.” The deer cries to Hashem. The deer asks for rivers of water, and he cries to Hashem. “Like a horse amassed, so I will neigh.” The horse neighs to Hashem. All the animals cry to Hashem. The only animal that doesn’t cry to Hashem is the snake. If a person doesn’t cry to Hashem, doesn’t pray the way he should, knows how to manage on his own, doesn’t need Hashem’s help, then Hashem have mercy: this is the curse of the snake.

A person prays three prayers a day, prays mincha for two minutes, ma’ariv for five minutes, and that’s it. He goes home and discovers that his child is sick. His wife is sick. There is no money. So he asks, “Why is my wife sick? Why don’t I have money?” I have paos and a beard, etc. But, in truth, everything is dependent on prayer. What about praying? Where is the prayer? Did you ask Hashem for healing? Did you say barech aleinu very slowly? Start opening your mouth and say the words very slowly. Don’t rush—don’t run. All the miracles and wonders are prepared already for every Jew. Just start asking. Don’t just look for the quickestminyan so that you can run home. “My wife is waiting for me; I have to run.” In the end, when he arrives home his wife is sick. Pray the shmonei esrei very slowly, and when you get home your wife will be healthy, your children will be healthy—you will see miracles and wonders.