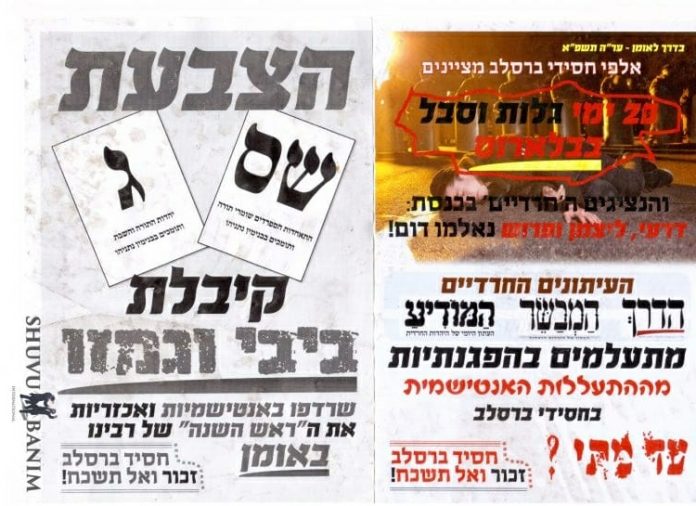 It was recorded shortly after Rabbi Eliezer Berland was brutally arrested, by the corrupt State of Israel police, in front of his congregation, one February dawn morning, after a months’ long campaign of vilification and ‘trial by media’ on totally false charges.

Back then, when this Shuvu Banim chassid was yelling out that Rav Berland and Shuvu Banim were just the canaries in the coalmine, and that very soon the corrupt State of Israel and their yassamnikim police would be coming for everyone else, too, who believed him?

So many of the Jews out there, secular and religious, Israeli and not, ‘Breslev-friendly’ and ‘anti-Breslov’, believed the lying propaganda pouring out of the MSM, both secular and supposedly chareidi – and judged the Rav as ‘guilty’.

I mean, what’s the alternative?! That we should believe that the State and its institutions are totally corrupt, and waging some sort of anti-semitic ‘war’ against its religious citizens and leading orthodox rabbis?!

And then, COVID-1984 erupted across the world, and all of a sudden, the picture totally changed.

For the last few years, I’ve lost count of the number of times I’ve seen slanderous pamphlets containing awful lies about the Rav and his community dumped, psycho-style, on the floor of Meah Shearim and other religious neighborhoods.

The last time that happened was just a few short months ago, when I saw a bunch of slanderous pamphlets dumped on the streets surrounding the Baba Sali’s tomb in Netivot. I wrote about that HERE.

The first day of Rosh Hashana in Uman, around 4-5 different sort of pamphlets suddenly appeared on the floor of Pushkina, where they’d also been dumped, psycho-style, in what passes for a mailshot in ultra-chareidi neighborhoods.

I gathered a few of them up and tucked them into my suitcase, so I could bring them home and scan them for you, dear reader. 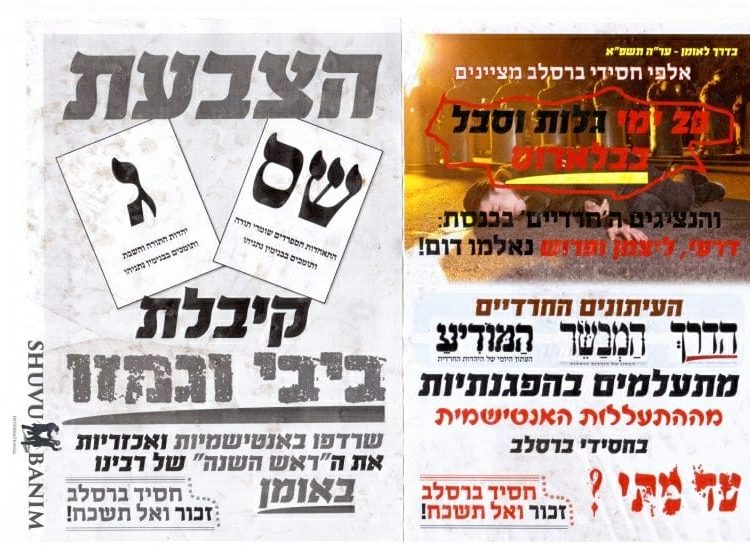 Here’s a free translation of what they say:

*Voted for Shas or Gimmel (United Torah Judaism)? You got Bibi and Gamzu, who chased after, with anti-semitism and cruelty, the Rosh Hashana of Rabbenu in Uman. Breslov chassid: remember, and don’t forget!

*On the way to Uman for Rosh Hashana 5781: Thousands of Breslov chassidim experienced 20 days of exile and suffering in Belarus. And the ‘chareidi’ leaders in the Knesset, Deri, Litzman and Porush stayed silent. The chareidi newspapers, HaDerech, HaMevasar, HaModia, totally and utterly ignored the anti-semitic persecution of Breslov Chassidiut. Until when?? Breslov chassid: remember, and don’t forget!

* Myriads of Breslov Chassidim are pointing an accusing finger against the Chareidi parties, who abandoned us, and our request to fulfill the will of Rabbenu, our teacher, his merit should protect us, amen, to come to him on Rosh Hashana. And even, [they] joined in with the wicked, cruel, anti-semitic persecution, that was without parallel, at the hands of Bibi Netanyahu and the members of his government. It won’t be forgotten, and it won’t be forgiven!

* Deri, Litzman and Porush! Myriads of Breslov Chassidim have a pained, broken and ripped heart, from the decrees of Netanyahu and Gamzu. How could you totally ignore what was going on? Breslov chassid: Remember, and don’t forget! 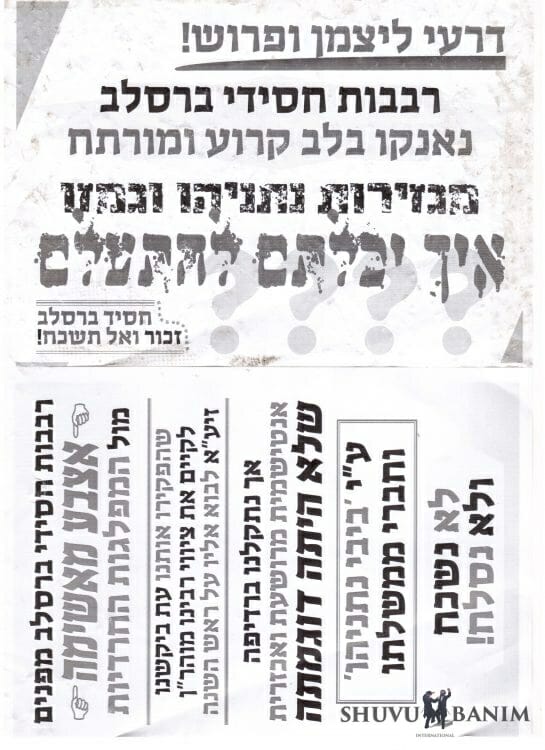 I read these pamphlets decrying the corrupt government, and the corrupt Chareidi press, and calling out the government’s obvious cruelty and anti-semitism – and I have to say, I had a strong case of déjà vu.

Waitttt a minute!!! Weren’t we saying that on the site here for the last 4-5 years already?!?!? Weren’t we trying to draw attention to the horrendous injustice, anti-semitism and cruel persecution that was being perpetrated by the government against Rabbi Berland, and also against Shuvu Banim and his followers?!?!

It seems to me, God has moved into midda keneged midda mode, and is now dealing with people exactly how they dealt with the Rav.

And depending on what you’ve been up to the last few years, that’s either going to make you very happy, or pretty apprehensive.

While we’re taking a trip down memory lane, let’s remember what so many rabbis and kabbalists said about this whole COVID-1984 thing, back when it was starting in February:

“What happens [when people start talking against Rav Berland?] Machalat Corona (the Coronavirus). Dear Jews, there is a very hard gezeira (decree), and chas v’shalom that it should not befall Am Yisrael. The Talmud says “Anyone who disgraces a talmid chacham – receives a disease of which there is no cure.”

Sometimes, the pain of a single person can bring on the destruction of the world.”

“When they came and took Rav Berland, and put him in jail – this was like the cry that ascended to the Heavens [and sealed the decree].

All of this big commotion is happening because this Tzaddik (Rabbi Eliezer Berland, shlita) is languishing in prison – in ‘bidud’ (isolation). Hashem is angry…

Rav Berland is stuck in prison, and Am Yisrael is stuck with this Coronavirus. We need to go out, and to cry out, until they free Rabbi Berland from the prison. If you have any brains in your head, if anyone wants to really save this [Jewish] people….

Perhaps, it was decreed that the Coronavirus was meant to be in the rest of the world, but in Eretz Yisrael, there was not supposed to be any Coronavirus. EVERYTHING IS HAPPENING ONLY BECAUSE RABBI BERLAND IS LANGUISHING IN PRISON.”

And if that isn’t sharp enough, let’s remember what Rabbi Bransdorfer said even just shortly before Rosh Hashana 5781, when the spectacle of a thousand Breslovers trapped in no-mans’ land between Belarus and Ukraine was so painfully unfolding:

“They took an 83-year-old Jew who opened the path to Uman and put him in jail.”

“The barriers to Uman started happening two years ago [before covid19 began], then already problems at the borders started, but we did not realize that it was a hint from Shomayim and Hashem is trying to wake us up. The Machlokes that took an 83-year-old Jew, Rabbi Berland, who opened the Tzion of Rebbe Nachman and put him in jail maybe that is what caused that Shomayim is not allowing us into Uman”.

The kabbalist and close talmid of the Rav, Rabbi Moshe Salmanovitch was also in Belarus last week, waiting to see if he could get across to Ukraine.

When he saw what was happening on the Belarus border, he said this to Rabbi Shimon Rubinstein, who in turn gave an interview to the Shuvu Banim Hebrew site, a little of which I’ll translate for you below:

“Rabbi Yaakov Moshe Salmanovitch sits here in Belarus and says this all the time – that the whole time that Rabbi Berland hasn’t been freed, so the border [to Uman] will not open. He says this to everyone who speaks with him. Yesterday, he was here at the border [in Belarus] and he didn’t want to cross [into no-man’s land].

I understand that he said explicitly that he first wants to know what happed with Rav Berland [at the Supreme Court hearing to free him], as we see that the whole time that the Rav remains behind bars under lock and key, so too are the whole of Breslov chassidut…”

So very many leading rabbis and chassidim from the Breslov community have passed away the last couple of years.

And even over the last week, two more of the biggest Breslov Rabbis passed away, one just before Rosh Hashana 5781 and one just after.

Did we get the message yet?

And don’t think this is just going to start and end with Breslov, because we can already see that’s not the case.

That same corrupt, cruel, anti-semitic government and media is now going after the wider chareidi community across Israel and the world.

The same week that the Bnei Brak community decided to ‘excommunicate’ the Rav and Shuvu Banim, Bnei Brak suddenly found itself locked down, peremptorily, with the IDF and police on its streets, making sure no-one could set a foot out of doors.

And now, that same cruelty and anti-semitic government persecution is being felt by every frum community in the country, with yeshivas closed down, chareidim being disproportionally tested, and whole cities been tagged as ‘disease-bearing’ red zones.

Why do you think that is?

What is the message God is trying to give the religious Jews out there, in particular?

And it’s not just the chareidi community that’s in the cross-hairs, either.

Just yesterday, I read how one of the leading lights of the dati leumi community in Israel, a person who repeatedly slandered the Rav across the media, and persecuted him at every turn, is now facing criminal charges himself, for ‘hate speech’.

(Of course, not for anything he said about the Rav, for a whole bunch of other things that he said, years ago.)

The evil is literally turning on itself right now, and that’s either going to make you very happy, or very nervous.

So, as we head into Yom Kippur, with more stupid lockdowns that do nothing except crash the economy and embitter the lives of millions of people in Israel, it behooves us to start making the links between what happened to Rav Berland and his community, and what is now happening to everyone else.

Before Rosh Hashana, there was a Supreme Court hearing, where the Rav’s lawyers argued for his release on humanitarian grounds. The judgement is still hanging. It can still be affected by our sincere teshuva and repentance.

When the Rav gets out of prison, we will all get of prison with him.

And don’t forget it.