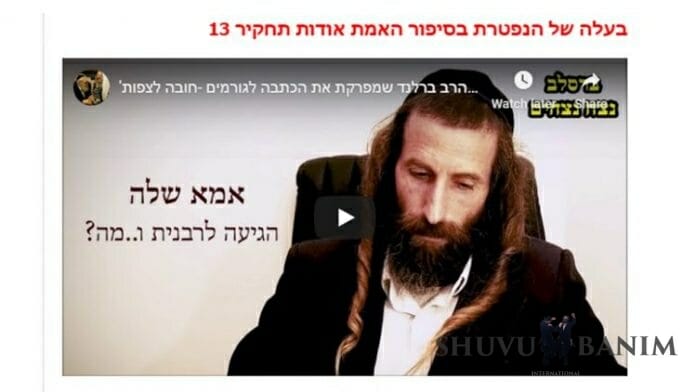 The Truth Behind Channel 13’s Lies

After Israeli TV Station Channel 13 publicized its awful calumnies about Rabbi Eliezer Berland, shlita, a couple of weeks ago, a number of different videos and articles came out in the Hebrew-speaking world to counter Channel 13’s claims, and show why they are very far from the truth.

Some of those videos were put out by Netzach Netzachim, and other organizations connected to Breslov, but some – like the following article – also appeared on ‘neutral’ websites such as srugim. Unfortunately, the Srugim article giving the other side of the story was pulled very quickly, following a number of threats made to the site by Rabbi Berland’s persecutors.

Hopefully, it’s instructive for our readers to see just how much pressure is being put on any media outlet, or individual, who dares to speak out against the non-stop lies being disseminated about Rabbi Berland, shlita, or who dares to try to publicize the truth.

The author of the article on Srugim, Oren Amit, had interviewed both sides in the Channel 13 affair, and formed an objective opinion of where the truth really lay, which he set out very clearly for his readers. It’s unfortunate that the wider audience of Srugim – which is neither Breslov nor ‘haredi’ – will not get to see that article now.

In the meantime, the first part of the original piece was reposted on our Hebrew site HERE, and we bring a translation of it in English, below.

All the stories about Rabbi Berland really just boil down to rumors. Everything is based on “he said / she said”. There is no factual evidence behind all the fictions and lies that have been heaped upon him. The following is a response to the Channel 13 investigation.

The report that was publicized last week by Channel 13 news was full of distortions designed to blacken [the Rav’s] name, incitement and biased attempts to portray Rabbi Berland as a killer and an extortionist, and his community as a cult.

The program vilified a recent widower and father of three orphaned children, who only buried his wife – their mother – two months ago. It made him out to be a brainless ‘cult member’, who was devoid of rational thought or free choice – this despite the fact that in his past, he was an elite fighter in an elite unit [of the army], (Sheldag / Maglan); owned a productive, high-class woodwork business; and was a devoted husband and ideal father.

The program took a very difficult family tragedy, and turned it into a vehicle to advance the vengeful, negative media campaign against Rav Berland, and his community.

In regards to the claim that he is a murderer:

The late Mrs. Vidra suffered from gallbladder cancer (cholangiocrychunoma), which is defined as a rare, deadly and aggressive cancer with 90% mortality within a few years. The only effective medical treatment is to surgically remove the tumor. If that doesn’t help, and the cancer continues to spread, then the accepted medical opinion is that chemotherapy in this case has very little chance of working, with almost a zero success rate. (See INFOMED / Wikipedia and other sites for more information).

Because of this, many doctors believe that the terrible suffering of the sick person, together with the danger of that the immune system could collapse prematurely, due to being exposed to a chemotherapy treatment that has a negligible and almost non-existent chance of success, means that this course of action is simply not worth pursuing.

This was mamash demonstrated in the case in question, when the patient’s situation deteriorated very quickly after she was given chemotherapy, to the point where she died before her time.

In the cases were the operation [to remove the tumor] fails, most doctors recommend a combined immunotherapy approach, which includes a strict diet to cleanse the body of toxins,  and strengthen the immune system, together with palliative care to support the sick person mentally and spiritually, and to help relieve the patient’s suffering and improve his quality of life until his death.

Believing Jews add in other religious elements to this approach, including making teshuva, giving charity, and undertaking prayers and doing pidyon nefesh, in an attempt to tear up the evil decree.

Encouraging and strengthening the sick person with prayers, visits, and also with promises that they will live until 100, and that they will be cured, and will be freed from their illness, is part of this palliative treatment – which is what Rav Berland provided to the patient. This isn’t thought of as ‘lying’, but rather, as giving the patient hope, and strengthening their emotional capacity to beat the illness.

The approach of following a strict diet to clean out toxins and to strengthen the immune system is based on many naturopathic doctors’ experience and knowledge, and this is a legitimate form of immunotherapy treatment, that Rav Berland also gave to the patient.

After the operation to remove the growth, the patient began a strict diet to try to rehabilitate her immune system in a natural way, and try to fight against a type of cancer that chemotherapy effectively had close to zero chance of treating successfully.

According to the testimony of her husband, and contrary to what was portrayed in the program, the patient dafka started to strengthen, in terms of her body, and was displaying a number of encouraging and hopeful signs, and was managing to function as normal, despite the enormous difficulty in avoiding a number of harmful foods that could damage her fragile health. And also, despite being subjected to the unhelpful verbal stress from her unhappy mother, who scorned the patient’s free choice to decide about her own life.

WATCH: The husband explains what really happened in his own words (in Hebrew):

The patient’s health was improving for around half a year, as she followed the mature and responsible path of immunotherapy treatment, and also by making a spiritual investment in prolonged prayers, expressing gratitude and having emuna  in the Creator of the world about her situation, and also giving charity and doing a pidyon nefesh, in accordance with the legitimate advice brought down in Chazal.

Despite all this, the mother, instead of supporting and strengthening the mature and independent decision of the patient, and respecting her free choice in the way she wanted to deal with her difficult situation, continued to undermine her daughter’s bitachon (trust) and emuna in the success of the process, in order to break her emotionally, and to make her obey the mother’s opinion.

The mother argued obsessively that her grown up daughter (aged 35) should agree to have chemotherapy, and refused to accept the legitimate choice made by the patient.

By using intimidation and emotional blackmail, she permitted herself to run wild with her demands for immediate chemotherapy, and she pressured [her daughter] in a shamelessly hurtful way to stop the immunotherapy process, in favor of having chemotherapy instead.

The mother refused to listen to any suggestion of alternative treatments, and insisted that [her daughter] should only have chemotherapy. She came to the Berland family home to meet the Rabbanit and the Rav, to pressure them to command the patient to stop the immunotherapy treatment, and to immediately start chemotherapy instead.

The fact that she came to the Rav’s home with a hidden camera teaches us that she didn’t just have the health of her daughter in mind, but rather, that she was also preoccupied with sharpening the knife that she hoped to skewer the Rav and his community with, after the death of the patient.

And all of this, why? Only because [the mother] believed that the chemotherapy treatments were preferable, despite the negligible chance of them succeeding, and the terrible danger they posed of causing the immune system to prematurely collapse.

THE TERMINAL ILLNESS THAT DISAPPEARED

Prayer for polyps to be successfully removed

Prayer to strengthen the spine

Prayer to have the best eyes in the world

YD Bergman - January 22, 2020 0
Shuvu Banim International and RavBerland.com would like to invite the online community to join our Yeshiva in Jerusalem from wherever you are in the world! Learn Breslov Torah, Halacha, Chasidut, Kabalah and anything else you...
Read more

Prayer for the eyes to never be diseased again

Kalman Wiseman - January 22, 2020 0
Rabbi Berland's Prayer For The Eyes To Never Be Diseased Again The following is translated from Rabbi Eliezer Berland’s compendium of prayers in the Refuah Shleimah booklet. To get the prayer in the original Hebrew,...
Read more

Prayer for a complete recovery of the eyes

Kalman Wiseman - January 22, 2020 0
Rabbi Berland's Prayer For A Complete Recovery Of The Eyes The following is translated from Rabbi Eliezer Berland’s compendium of prayers in the Refuah Shleimah booklet. To get the prayer in the original Hebrew, you...
Read more

Prayer to save the eyes

Kalman Wiseman - January 22, 2020 0
Rabbi Berland's Prayer To Save The Eyes The following is translated from Rabbi Eliezer Berland’s compendium of prayers in the Refuah Shleimah booklet. To get the prayer in the original Hebrew, you can buy the...
Read more

Prayer to recover and guard the eyes

Kalman Wiseman - January 22, 2020 0
Rabbi Berland's Prayer To Recover And Guard The Eyes The following is translated from Rabbi Eliezer Berland’s compendium of prayers in the Refuah Shleimah booklet. To get the prayer in the original Hebrew, you can...
Read more

Prayer for a miraculous healing of the eye

Kalman Wiseman - January 21, 2020 0
Rabbi Berland's Prayer For a Miraculous Healing Of The Eye The following is translated from Rabbi Eliezer Berland’s compendium of prayers in the Refuah Shleimah booklet. To get the prayer in the original Hebrew, you...
Read more

Prayer to heal pain in the eyes

Kalman Wiseman - January 21, 2020 0
Rabbi Berland's Prayer To Heal Pain In The Eyes The following is translated from Rabbi Eliezer Berland’s compendium of prayers in the Refuah Shleimah booklet. To get the prayer in the original Hebrew, you can...
Read more